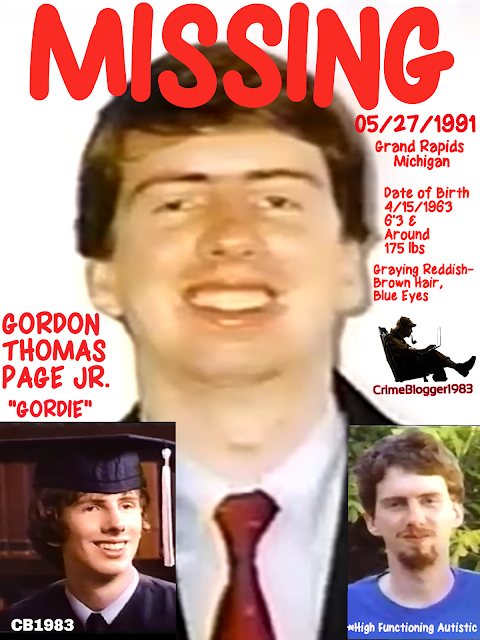 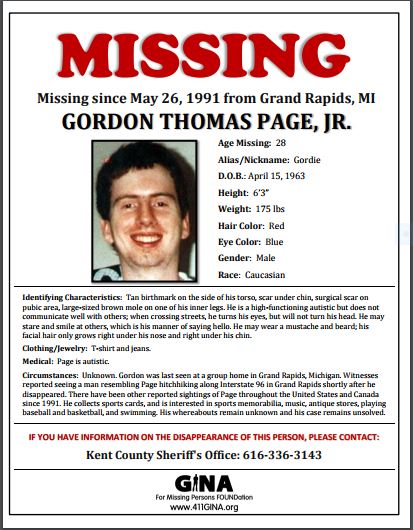 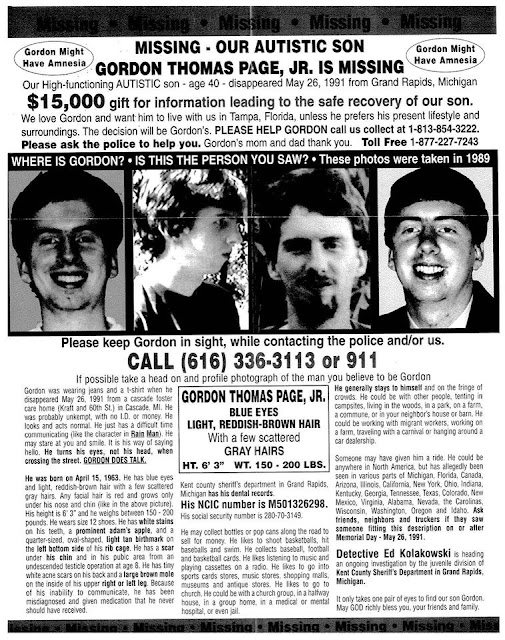 Light Tan Birthmark on Lower Left Side Of Rib Cage
Scar Underneath Chin
Small White Acne Scars on his Back
Large Brown Mole on the Inside of his Upper Leg
Scar on Pubic Area from an Operation
White Discoloration on Several Teeth
Only Moves His Eyes, Not His Head
Hair Grows Only on His Chin and Under His Nose, May Wear A Mustache and Goatee, Prominent Adams Apple.

Gordie is a High Functioning Autistic. Behaves Normally, But Has Trouble Communicating. May Stare and Smile at Others. (His way of saying hello) Has Been Misdiagnosed (Received Unneeded Medications)In The Past Due To His Problems with Communication. But Gordie can talk. He also Suffers from Seizures and Needs Medication to Control Them.


Gordie was placed in the Cascade Foster Home in Grand Rapids Michigan in 1991. This facility has since been torn down. But it was located on Kraft Avenue and 60th St. Cascade was an established treatment center for the autistic. His family resided in Florida and waited 2 months before visiting him. Gordie was anxious to see his father when he visited him in May of 91. Gordie tried to enter his dad's van as he was leaving. 6 days after his father visited him Gordie vanished from the home after breaking a window. (May 26st 1991) He was not carrying any ID, Medication, or Cash when he left. He was wearing Blue Jeans and a Plaid Shirt. (I've also read he wasn't wearing any shoes either.) There were reports that a man resembling Gordie was seen hitchhiking along Interstate 96 in Grand Rapids shortly after he vanished. Part of a baseball card collection was found underneath an overpass on Interstate 96 around six weeks after he disappeared. The cards were found near ramps leading to Detroit, Michigan and Chicago, Illinois. 3 cards were separated from the others. The 3 cards happened to be Gordies favorite players. Robin Yount, Paul Molitor and Eddie Murray.Gordie likes playing baseball and basketball. He also enjoys swimming. He likes collecting sports cards and shopping in sports related stores. Its been reported he may collect empty cans and bottles for cash. He may linger around Automobile Dealerships since his family use to own one. Gordie generally keeps to himself. Its possible he may have been admitted into a psychiatric facility as a John Doe. 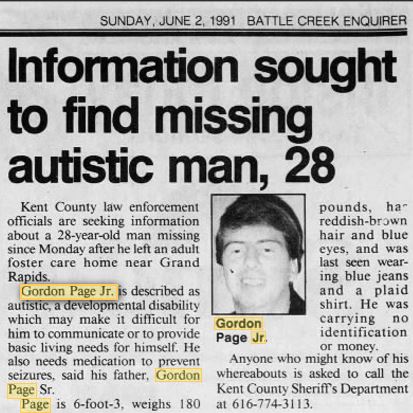 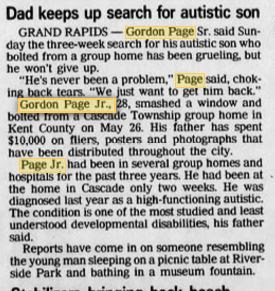 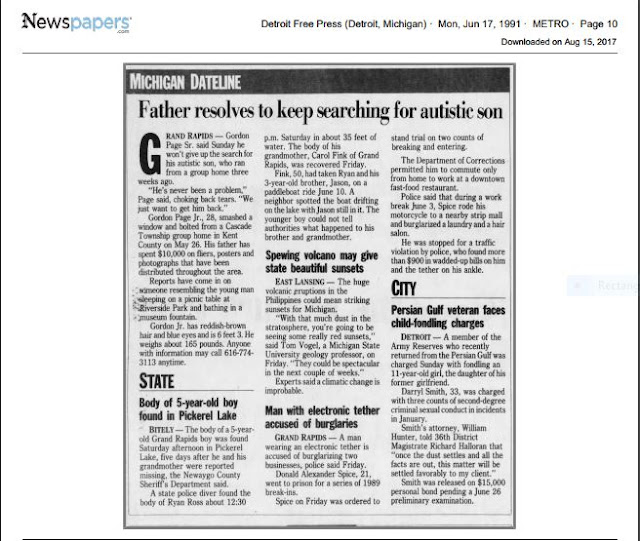 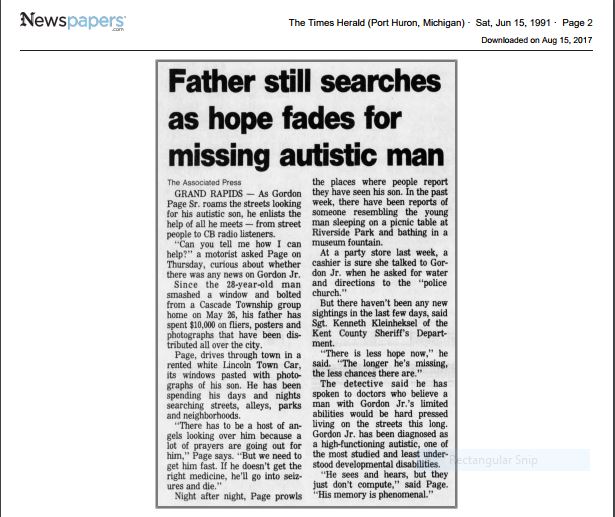 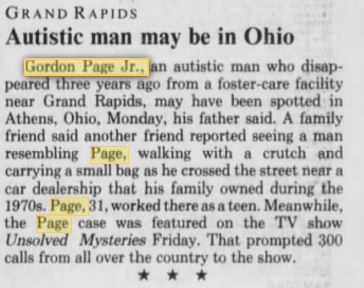 Excerpt from a fairly recent article dated June 28th, 2017
Entire Article
Officers from each respective department provided background on each missing person during the event.
Gordon "Gordie" Page Jr.
Page has been missing for almost 26 years, according to Sgt. Bryan Muir from the Kent County Sheriff's Department. Page reportedly walked away from a group home in Cascade Township. He is described as being a quiet, high-functioning autistic man.
"Gordan mentioned he wanted to live with his dad, who was from outside the area," Muir said. "His dad dropped him off at the group home facility and was never seen or heard from again."
At the time Page went missing, he was 28 years old, meaning he would be in his mid-50s today. At the time he went missing, Page was six feet three inches tall, an average weight with blue eyes and reddish brown hair. Page is reported to have a difficult time communicating, but has the skills to function in society on a limited basis.
Muir said if anyone -- especially from the group home where Page was staying -- has more information, it would be helpful to their investigation.