The "Disappearance" of Leigh Marine Occhi :An Interview With Donald Occhi 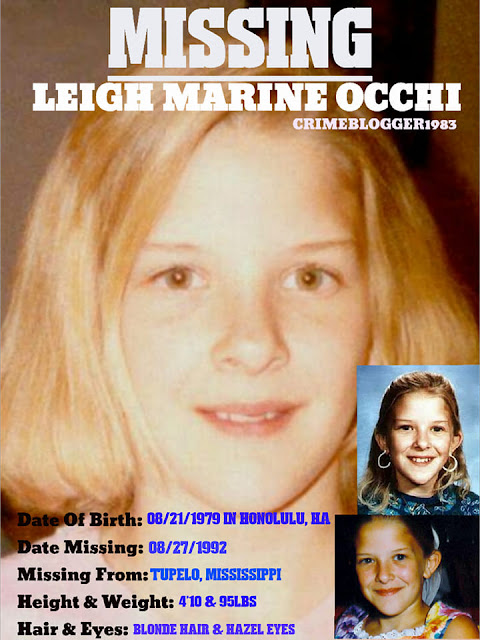 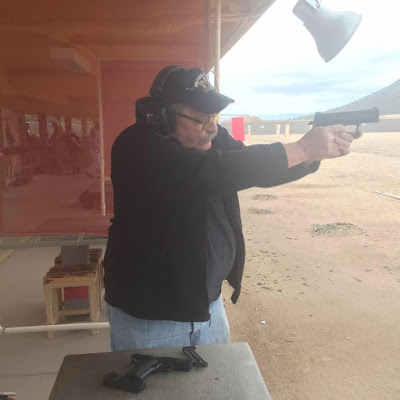 An Interview With Donald Occhi
I was able to conduct an interview with Donald Occhi regarding Leigh's disappearance last night. I would like to thank Mr. Occhi for taking time outta his day to let me ask some questions regarding Leigh's disappearance. I could tell that the anger was still understandably there.
1) How did you learn of Leigh's disappearance?
The Day After It Happened. All She Said Was Leigh Was "Missing". I Told Her To Call Her Friends. She Was
Probably With One Of Them. A Couple Of Days Later She Called With The Details Of The Blood And Everything Else.
2) Before Leigh went missing, When was the last time you talked with her?
I Dont Remember. We Talked Once Or Twice A Month On The Phone. She Didnt Say Much On The Phone. I Had The Impression Vickie Was Always Listening.
3) Describe Leigh as a person and where was Leigh born?
Leigh Was Born At Tripler Army Medical Center in
Honolulu. Leigh Was A Smart, Funny, And Affectionate Kid. At least Towards Me She Was.  She Was Standoffish Towards People. I Don't Know If That Was Because Of Her Situation Or Because Of Genetics. I'm A Standoffish Person. So I'm Not Sure. She Loved Horses And Animals.
4) How did you meet Vickie?
I Met Her When She Was
Stationed At The Defense
Language Institute/Foreign Language Center In Monterrey, California. She Was Studying Korean And Interrogation Techniques. She Was A Trained Interrogator.
5) Can you describe the
relationship the two of you had?
It Was Good. We Were
Seperated Alot.
6) Did Leigh and Vickie get along? Can you describe their relationship? Was Leigh Abused Physically or Sexually to your knowledge?
Their Relationship Was Strained At Best. Not To My Knowledge No.
7) As a person can you describe Vickie?
Highley Intelligent And A Neat Freak.
8) When was the last time you spoke to Vickie? Have you
spoken with her over the years?
I Don't Remember. No, I'd Have Nothing To Say To Her.
9) Did you ever meet Barney Yarborough? What was your impression of him?
Yeah I Met Him And I Wasnt Impressed. He Is Dead. I Think He Knew What
Happened. But I Dont Think He Was Involved.
10) How did Barney die and what was his profession?
I Heard It Was Lupus. I Couldn't Tell You What His Profession Was.
11) I've read that there is other evidence that LE hasnt made public. I've read about a diary. Did she have one? Are you aware of any of the other evidence?
I've Heard About That. (Diary) But I Don't Know.
12) Vickie had a theory of her own. I didnt even include it in my prior post because I didnt lend much credence to the theory. Are you aware of who she was referring to?
Yeah, I Don't Remember The Guy's Name. Otis Maybe. But I Know That He Was Ruled Out As A Suspect. He Was Around 40 To 50 Miles Away At The Time. (The suspect Vickie was referring to is Oscar Mckinley "Mike" Kearns)
13) What did you think of LE's approach to Leigh's case?
I Had My Concerns. I Don't Think They Had Dealt With Someones With Vickie's
Intelligence Before. She Was A Trained Interrogator. She Knew How To Act Regarding Questioning. She Had
Interrogated Koreans While In The Army. I Had A Friend Who Was Also A Trained
Interrogator. I Asked LE If They Wanted Him To Help Them Question Vickie. They Said No. I Didnt Understand It. She Failed 3 Polygraphs. I Mean How Many Did She Have To Fail?
14) I read where you think she was murdered the night prior. Can you elaborate on why you think that?
Just The Time Frame. There Wouldnt Be Enough Time For Someone To Come To The House When Vickie Left At 7:50 am. Kill Leigh. And
Attempt A Clean Up And Leave Before Vickie Came Back Home At 8:45. This Is All While A Hurricane Is Going On. Who Comes Into A House And Kills Someone. Then Attempts To Clean Up The Scene? Why Clean It Up?
15) Yeah, After reading all the information online. I think a telling clue that no one picks up on is the clothes in the hamper? Why put them there? What kind of killer places bloody clothes in a laundry hamper?
A Neat Freak. That's
Something I Tried To Explain To LE. I Told Them Vickie Was A Neat Freak. Another Reason I Believe She Was Killed The Night Before Is That A Person Who Knew Vickie Witnessed Vickie On The Night Of The 26th At A Car Wash Washing Her Car Out. She Was Also Spotted By A Neighbor After Leigh's
Disappearance Cleaning Her Front Door. To This Day I Don't Understand Why The House Was Never Sealed Off. LE's Excuse Was That They Couldn't Do That Because They Couldn't Throw This
Person Out Of Her House. I Argued That She Could Stay With Her Parents. It Did No Good.
16) What do you think
happened to Leigh?
I Think She Was Murdered The Night Of The 26th. And Placed In The Trunk Of Vickie's Car. And Taken Somewhere. Where? I Don't Know.
17) Did Vickie have a temper?
Yes, A Very Bad Temper.
18) What would be the reason why you'd think Vickie would harm Leigh?
I Don't Know. Fit Of Rage?