First thing Id like to say before I begin this entry is that my last entry was on Shantelle Hudson. And like always I reached out to LE. And like always I expected nothing in return, I was surprised this time. Lt. Jerry Pattison responded and although he couldn't assist me with any questions regarding the case. He had no issues with me asking them. He was open and friendly. And even stated he knew many of these case that I and other bloggers cover can (and some are) be solved outside of Law Enforcement. I requested a copy of the Missing Persons on Shantelle and he stated that since it was still an active investigation. He was unable to do so. Even though he was unable to answer my questions. His courtesy is something I very much appreciated. So much so that I also did this entry as well from the same county as Shantelle's case. If only the rest of Law Enforcement would be so kind. Some of us care just as much as Law Enforcement in regards to these cases. Many of us don't want to just write about them. They want them solved as well. Thank You Lt. Pattison. I did try contacting her son for this entry. I doubt I will hear back from him tho.

Song Popular Around The Time
WildWild West: By Wil Smith
I put this music video up cuz it was the only remotely decent song I saw that was around the time that she disappeared. I wasn't gonna upload Ricky Martin or Britney Spears. I'm not that cruel of a person. Song title is appropriate for the area she lived in as well. I do not own the rights to this song or video. 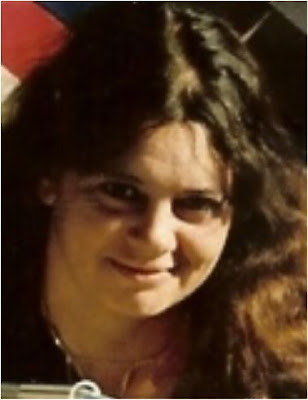 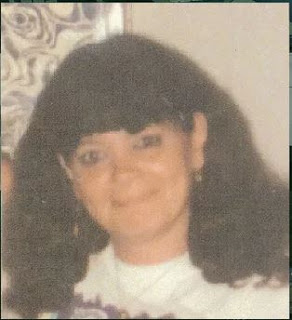 “She’s another one who vanished without a trace,” Pattison said. He said there is a suspect in the case who was close to Pennington, but “without a body it’s a difficult thing to prosecute. You only have one witness, who is also your suspect.” 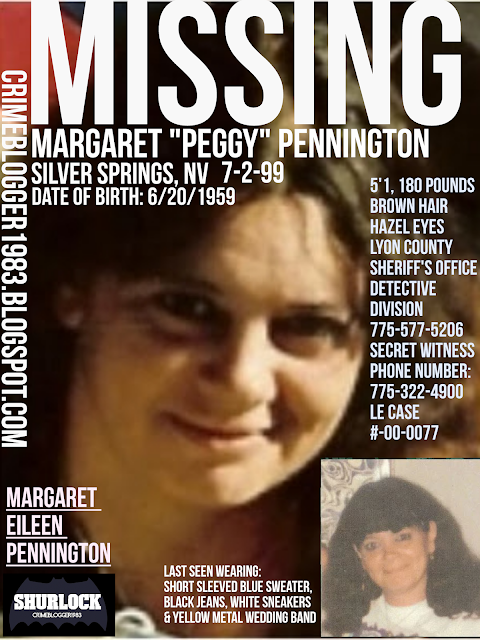 July 2nd 1999 - According to reports I've read of the day in question. Peggy Pennington left her residence at 1300 Block of 5th St. on foot and no one has seen her since. She was known to leave for periods of time before. But she would always come back to get her Social Security Check. She has not since that day. According to her Son (Tim) and Daughter in Law she was not acting unusual in any way. She casually mentioned there was food in the kitchen. And according to them. That was the last time they saw her. According to the Lyon County Sheriff's Office home page that is listed in the above links....

That pretty much tells you right there. They have either suspicions or circumstantial evidence that a crime has been committed. Also if you read the quote at the beginning of the entry. It kinda gives it away. According to Peggy's friends her husband Raymond Patrick Pennington threatened to kill her on several occasions. She was reported missing a week after she went missing. I don't see any reported sightings of her since. Nor has there been any reported progress in her case.

Well, It's pretty evident that the home was a violent household. Why do I say this? I did a little research on her son Timothy Ray Pennington. Apparently, He was a pretty violent individual himself. First off how do I know HE was the son to last see his mom? Here is how I know.... 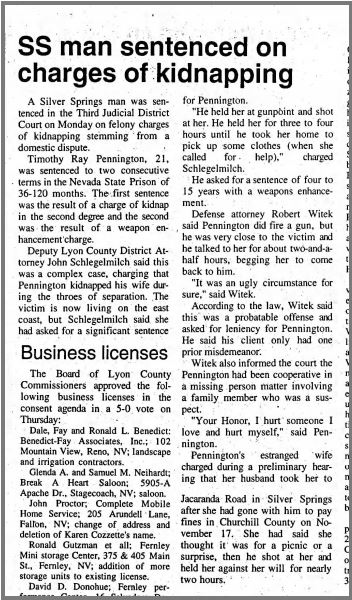 "Also informed the court Pennington had been cooperative in a missing person matter involving a family member who was a suspect."


So he was one of the last people to see his mom. As well as his wife at the time. As I stated he was a violent individual. Wonder where he learned that kind of behavior? If you read the article in full it talks of an incident where he kidnapped his wife at gunpoint and held her for 3 to 4 hours. During this entire kidnapping he was begging her to come back to him. I wonder why she left him? That's a mystery. They ended up divorcing. However years later he repeated the same pattern of behavior. Only he murdered his girlfriend. Then committed suicide like a coward.

Ok so one of the things I think are completely ludicrous about this case is that we are suppose to believe she left on foot.... 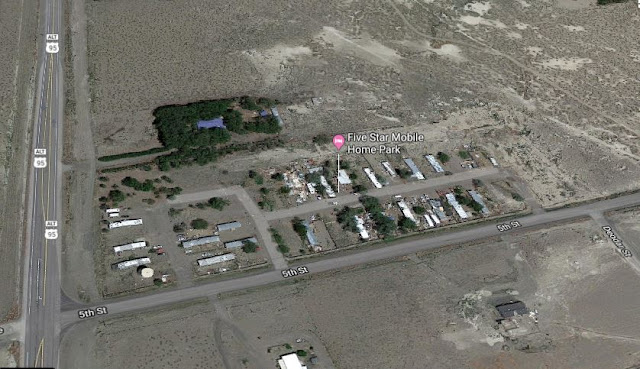 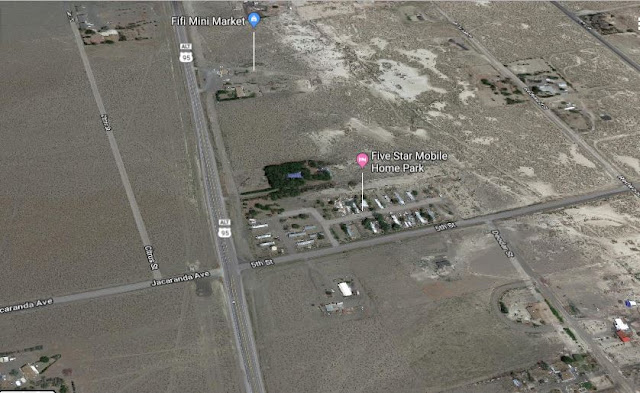 Question, WHERE THE HELL IS SHE GOING ON FOOT? WHERE!? I mean unless she is going to a friends house. There is no where to go. Pretty obvious this is a homicide. Violent home. No reported sightings of her in 20 years. Law Enforcement is holding out on a tip to come in. If I were them. I'd question Timothy Ray Pennington's Ex. She was reportedly there on the 2nd before Peggy "disappeared". And she would have nothing to fear regarding her ex since he is deceased. Also, I wonder how conclusive Tim's suicide was? You gotta figure if he really did know something regarding his mom's disappearance. And if what is reported in the newspapers was accurate. That he was being cooperative with his mom's case. I wander if the dad might see an opportunity to silence a potential witness after he murdered his girlfriend. It's out there yeah. But a possibility nonetheless. I concur with Law Enforcement. She is deceased. 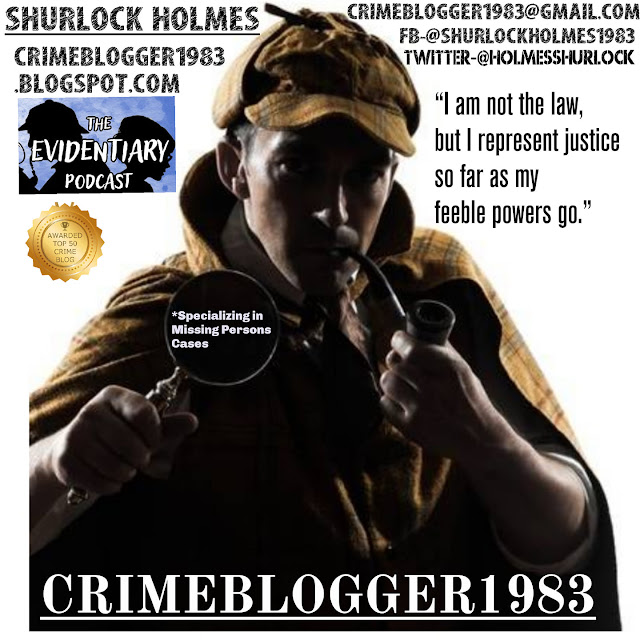